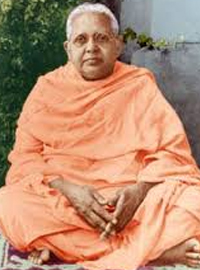 Pravrajika Bharatiprana was the first President of Sri Sarada Math and Ramakrishna Sarada Mission. She was a student of Sister Nivedita and a direct disciple and personal attendant of Sri Sarada Devi. It was as if Sri Sarada Devi gave her spiritual training to prepare for the great responsibility which she had to undertake in the future. She had been given TantrikSannyasa and the name Sri Bharati by Swami Saradananda in 1926. In 1959 Vedic Sannyasawith full rites was given to her and seven other senior Brahmacharinis (Novitiates) by Swami Sankarananda, the seventh President of the Ramakrishna Math and Mission. Her simple, quiet and serene personality made her the object of everyone’s reverence. Many men and women were inspired to lead spiritual lives after taking initiation from her.She was born in July 1894 in an ordinary brahmin family in a village called Guptipara. She was the eldest daughter of Sri Rajendranath Mukherjee and Sushila Devi. Her parents named her Parul.In her early years Parul was brought to Calcutta where she was drawn to Sri Sarada Devi, Sister Nivedita and Sudhira-di, who became her mentor in her spiritual journey. Sudhira-di, a brave and fearless young woman full of love, enthusiasm and renunciation went to teach at Sister Nivedita’s school when Parul was in her senior class. Like many other students of her class, Parul was irresistibly attracted by Sudhira-di’s powerful personality She tried to arouse the religious feeling in her students. With Sudhira-di’s permission and encouragement, Parul left home to renounce the worldly life. Sudhira-di renamed her Sarala and took her to Sri Sarada Devi for spiritual initiation.Sarala embraced the life of austerity and hardship and wasstaying at one place or other as Sudhira-di arranged for her. Sri Sarada Devi kept a loving eye on Sarala. Sarala nursed her during her last illness. She often prayed,’Oh, Mother, I will not be able to live without you, so please take me with you.’ Sri Sarada Devi replied, ‘Finally it is to me you will come, my child. But before that,I have some work, which you will have to do. It will not do if you go now.’ In her last days, she had instructed Swami Saradananda to look after Sarala.SwamiSaradananda executed this responsibility with parental care and made some provision for her maintenance. After Swami Saradananda passed away, Sarala spent twenty-seven years from 1927 to 1954 in spiritual practices at Varanasi. There she lived alone and faced many ordeals but she never spoke to anyone about them. She was cheerful in the face of a hundred difficulties and firm on her path with absolute faith in Sarada Devi. Unseen by the world, with the help of God alone, she reached a very high state in her spiritual life.During Sri Sarada Devi’s birth centenary (1953-54), when arrangements were being made for the opening of a Women’s Math of the Ramakrishna Order, the Belur Mathauthorities naturally thought of Sarala Devi (later named Pravrajika Bharatiprana) as the first President of Sri Sarada Math. They all felt that through Sarala Devi the Women’s Math had a direct link with Sri Sarada Devi. For eighteen years, from December 1954 to January 1973, she was the President of Sri Sarada Math. Her mind always dwelt on a higher level of consciousness. Despite her efforts to conceal her real self, her Mahasamadhi(absorption in the divine by an illumined soul at the time of death) brought her extraordinary spiritual attainment to the notice of all who witnessed it. During her last moments she withdrew her mind and utteringSatchidananda Brahma, Satchidananda Brahma, Shivoham, Shivoham (God, the Existence-Knowledge-Bliss; I am Shiva) her mind merged into the Infinite Brahman.PravrajikaBharatiprana, Sri Sarada Devi’s beloved Sarala was a bright example of a life full of renunciation and total dependence on God. 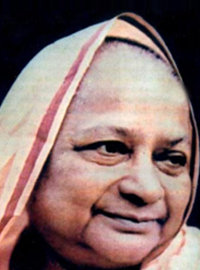 Pr. Mokshaprana Mataji was the second President of the Sri Sarada Math and the Ramakrishna Sarada Mission. During her long tenure of twenty-six years of spiritual ministration, she initiated thousands of people, guiding them to lead a spiritual life.Before she became President of the Math, she was headmistress of Sister Nivedita’s Girls’ School from 1946 to 1948. In 1948, when Swami Virajananda informed her that someone with the proper qualifications was going to replace her soon, he wanted to know ifshe would remain in the school. She replied that she would stay even if she had to accept the role of a janitor, so determined was she to live an ashram life! She had an ardent interest in providing education for women as envisaged by Swami Vivekananda. Bold and fearless, she encouraged other women to be fearless and self-confident. SwamiPremeshananda met her at Nivedita School and later wrote to her, ‘The very sight of you has raised such high hopes in me that I rejoice at the prospect that through you we may at last give effect to our long, long cherished vow of bringing about women’s emancipation.’After the Sri Sarada Math and Ramakrishna Sarada Mission were established, PravrajikaMokshaprana became the Vice President of the new organisation and the Secretary and Headmistress of ShikshaMandir, a branch centre of the Ramakrishna Sarada Mission at Baruipara in Kolkata. She thought of the students as her chosen ideal and was able to identify with them. The children responded to her faith in them. Under Pravrajika Mokshaprana the expansion of Sri Sarada Math and the Ramakrishna Sarada Mission which had started in the time of Pravrajika Bharatiprana continued to spread. New centres came up in Arunachal Pradesh, Pune, Bangalore, Trivandrum, Indore, Bhuvaneswar, Haridwar, Almora and one in far off Australia. New Mission centres were opened in the rural areas of West Bengal like Burdwan, Midnapore and 24 Parganas and Siriti in Kolkata. As President, she visited all the branch centers in India giving initiation to many and spreading the message of Sri Ramakrishna, Sri Sarada Devi and Swami Vivekananda. Whenever she visited a centre she created an atmosphere of a joyful festival to which the devotees looked forward each year.PravrajikaMokshaprana’s life was distinguished by her learning and discipline. Her articles and lectures were published in the journals of the Order. A voracious reader, she studied the scriptures as well as other books about world History and trends. She was interested in a variety ofsubjects such as literature, astronomy, geography and philosophy. She enjoyed discussions with the scholars and distinguished litterateurs who visited her regularly. Her compassionate heart attracted many souls from far and near. Whether tribal children of Northeast India, scholars from America or probationers of the Math, everyone received her motherly love and inspiration. 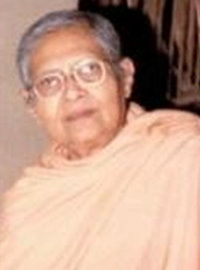 Pr. Mukthiprana Mataji was the first General Secretary of Sri Sarada Math and the Ramakrishna Sarada Mission. Her parents were disciples of Swami Shivananda(MahapurushMaharaj), the second president of the Ramakrishna Order. Asha (Muktiprana’s pre-monasticname) studied at a Christian Missionary School where she achieved the highest marks in every subject in each examination. When she was only sixteen years old,inspired by reading ‘Talks with Swami Vivekananda’ she cherished the dream of joining a women’s Math. She asked Swami Nirvanananda if the women’s Math mentioned by Swami Vivekananda existed. Since it had not yet been established, in 1941 she started a women’s ashram of her own. Her charming and spirited personality attracted a group of young students who lived there with her. In 1946 Asha began to seek the company and advice of Swami Madhavananda who was the General Secretary of the Ramakrishna Math and Mission, discussing with him the possibility of starting the women’s Math of the Ramakrishna Order.

SwamiVirajananda, the sixth President of the Ramakrishna Math also blessed her desire and in 1950 the Sister Nivedita Girls’ School, then affiliated with the Ramakrishna Mission became the venue for the joining of a group of dedicated women workers of the School with Asha’s SaradaAshrama.During Holy Mother’s Centenary celebrations in 1953-54, Asha’s abilities for management led to the success of the International Women’s Convention in which the talents of the dedicated young women workers became known to the public.When Sri Sarada Math was established in 1954, Muktiprana was appointed as the General Secretary. She held the post for forty years, setting a unique example of dedication and selfless service. She kept contact with innumerable devotees and friends in India and abroad. She was an extraordinary administrator.

She authored many articles and a few books in Bengali and English, including a chronicle of Sri Sarada Math’s history, published serially in Bengali. She saw to it that the Math would start a journal in English and one in Bengali. Her authoritative and well-researched biography of Sister Nivedita in Bengali was a pioneering work of literary acclaim. In the daily work of the Math, and on special occasions alike, she would involve herself in every detail. She had genuine affection, sympathy and patience for everyone in the Order: junior or senior.

She had the quality of untying the knots in a personality and kept a watchful eye on each member so they felt she knew them better than they knew themselves. Her life was dedicated to being free and making others free. 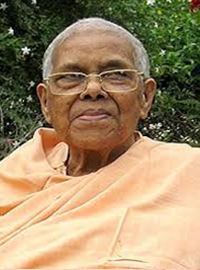 Pr. Avrajika Shraddhaprana Mataji was the third President of Sri Sarada Math and Ramakrishna Sarada Mission. She took her office on 17th November 1999, the day of JagaddhatriPuja.Born in Patna in 1918 of parents Mathuranath Sinha and Sushila Sinha, she was named Lakshmi. Her father had seen Sri Ramakrishna and had met Swami Vivekananda. She received initiation into spiritual life in 1941.

Shraddhaprana Mataji is a disciple of Swami Virajananda the 6th President of the Ramakrishna Math and Ramakrishna Mission. Before joining the Sister Nivedita Girls’ School in 1948, she was a lecturer in the Annie Besant College, Varanasi. In Nivedita School she served as the Asst. Headmistress and Asst. Secretary till 1955 then as Headmistress till 1968 and Secretary till March 1986. In 1953 she took the vow of Bramacharya along with six others and received Sannyasa along with seven others ( the first batch of Sannyasinis of the Ramakrishna Order) from Swami Sankarananda, the then President, at BelurMath.When Sri Sarada Math was given independent status in 1959, she became one of its trustees andin 1960 she was appointed as Assistant Secretary of Sri Sarada Math and Ramakrishna Sarada Mission. She came to live in Sri Sarada Math in April 1986. After the passing away of PravrajikaMuktiprana in 1994, she was elected as the second General Secretary. She held this office till 17 November 1999. 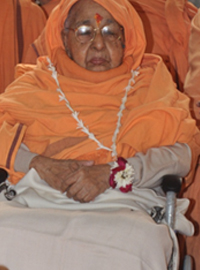 Her motherly nature and self-effacing personality endears her to everyone. Apart from her work in the hospital she has also conducted flood, famine and other relief work in West Bengal and Orissa.